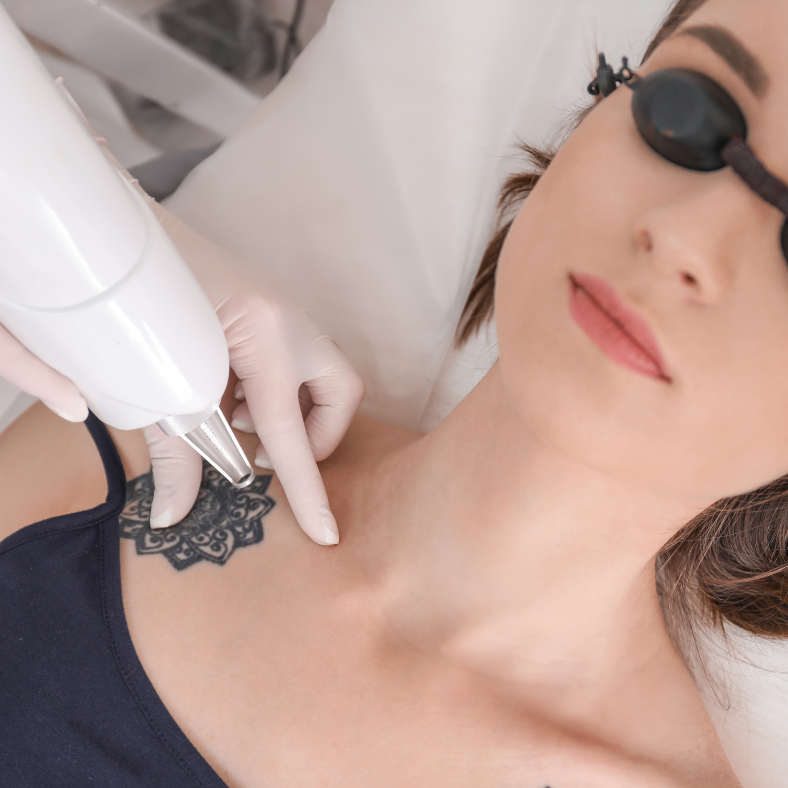 If you’re thinking of getting rid of a tattoo then you may soon become baffled by the laser terminology. Picosure Laser vs Q Switch tattoo removal is a comparison that you will probably come across. I’m going to explain what they are, so that you can make your own decision.

Firstly I need to explain how laser tattoo removal works so you understand the basics:

How does laser tattoo removal work?

The laser is passed over your tattoo, and each flash of light hits the ink and causes it to shatter. This makes the ink break apart into smaller particles. Your body’s immune system then gets to work ‘mopping up’ the tiny particles of ink and expels them as a waste product.

For this to work, your immune system needs to be healthy and working well. If you are ill or compromising your immune system by smoking or taking drugs then this whole process will take longer. The speed of removal is therefore not always down to the laser but to your own body.

What is Picosure Laser?

A Picosure laser is a brand name for a laser which delivers very fast pulses of light – after the term Picoseconds. A picosecond is a unit of time – which is a trillionth of a second. The pulses of laser light are so quick, they are very effective at shattering tattoo pigment into smaller particles.  This then allows your body to do the rest.

What is Q Switch Laser?

A Q switch nanosecond laser was always considered to be the gold standard of tattoo removal before Picosecond lasers came along. Q switching refers to the way the light is held back and then released, causing it to be really powerful. Imagine water cascading down a river – it’s quite powerful. However if you hold the water back termporarily with a damn and then suddenly let it go – it becomes even more powerful. That’s essentially what a Q switch laser is doing.

So which should you choose? Well different studies have concluded different things. Some have shown that picosecond lasers break down ink more effectively. For example this study found that 12 out of 16 patients who took part in the trial had better clearance with a picosecond laser than a nanosecond. Click here to read that. However others studies have found virtually no difference. A British Journal of Dermatology study – concluded that the use of Picosecond laser pulses does not provide better clearance than nanosecond laser pulses. Click here to read that.

Other studies have found that nanosecond pulse lasers at high energy settings perform as well as ‘picosecond’ pulse lasers. It really depends on the quality of the laser.

It’s not just Pico vs Nano – the wavelength also matters

The speed of the laser pulse is one matter – but the colour of wavelength of light is another matter entirely.

You can get several ‘colours’ of laser in both Picosecond and Nanosecond. Just because it’s one or the other doesn’t mean it will effectively remove your tattoo.

For example the brand Picosure is excellent at removing most colours of tattoo ink, apart from red where it really struggles. Therefore a Lynton Lumina ND Yag Q Switch ‘nanosecond’ laser would work much better.

You need to weigh up the colours of your tattoo and work out which laser will work best.

The price of Picosure Laser vs Q Switch treatments

The Picosure laser and other ‘Pico’ brands are incredibly expensive pieces of equipment. Therefore the price of a laser tattoo removal treatment reflects that. Good Nanosecond lasers are also expensive… but we’re talking the price of a semi-detached house versus a 2 bedroom apartment. Here’s a comparison where we’ll say you have fewer ‘Pico’ treatments than ‘Q-Switch’ treatments.

I operate an ND Yag Q Switch Nanosecond laser in my clinic – so you might imagine I’d be trying to ‘plug’ this technology above a Picosure laser.

However I’d rather be as honest as I can. The reality is that a Picosecond laser may reduce the ink in your tattoo slightly quicker (unless it’s the wrong colour laser for the colour of your ink.) As I’ve shown above you may be looking at 6 sessions instead of 7 or 8, but you’ll pay 3-4 times more money. From the clients who’ve come to me having tried both systems, they haven’t declared ‘Pico’ as an obvious winner.

Don’t just take my word for it. PhD physicist Dr Samantha Hills, Director at Lynton Lasers and Lecturer at the University of Manchester says “there is not doubt that picosecond lasers can offer excellent, safe tattoo removal, but there is still limited evidence to conclusively prove they give faster or more effective clearance than a top-end Active Q-Switch laser. Most people will probably find the rate of clearance with a good Active Q-Swtich laser is comparable, and treatment much more affordable.”

What do I honestly think? There’s no absolute guarantee about the number of treatments with either – as I said at the beginning it’s also very much down to your body and immune system, as well as the position of your tattoo! I believe that a really good Q Swtich Nanosecond laser treatment will be as good (or almost as good) as a very expensive Picosecond laser treatment.

P.S. If you do choose a Q Switch laser – make sure it’s an ‘Active’ Q Switch laser, and not a ‘Passive’ Q Switch laser. There’s a big difference between these. Passive lasers are a lot less powerful and used primarily by tattoo artists to fade a tattoo before a ‘cover up’.