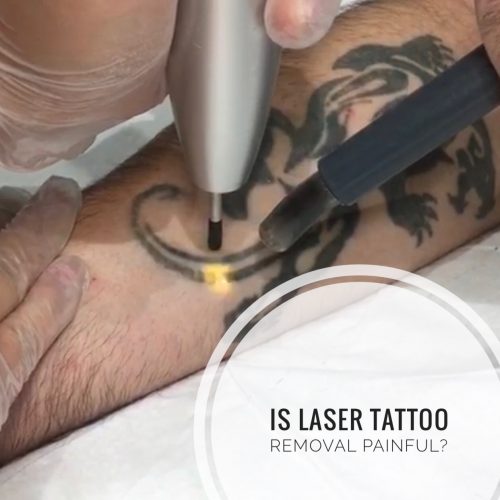 How painful is it?

The real question is how painful is it?  If you’ve had a tattoo done in the first place and you got through that, then believe me you can get through laser tattoo removal.  The feeling is really like a hot needle pricking you very quickly, or like an elastic band twanging you over and over again.  Or imagine frying an egg and the oil ‘spits’ at you – then that’s also a good way of describing it.

Saying that I have had a huge number of clients who’ve said: “Oh is that all it is, it’s not as bad as I expected!”.  I’ve also had an equal number who’ve said “Oh this really hurts”.  Then there are plenty in the middle who say it hurts but it’s manageable.

The area of the body makes a big difference.

If your tattoo is on your upper arm, shoulders or somewhere quite fleshy, then these areas tend to be less painful than bony areas.  Laser tattoo removal across the spine usually hurts more. Also laser tattoo removal on the hands and feet hurts more than on fleshy areas of the arm or leg.

The size is something to consider.

How long did it take to apply your tattoo? 1 hour? 2 hours? Well consider this – a small tattoo which took around an hour to apply, will take only seconds to laser.  So something 2 inches by 2 inches in size may take just 30-60 seconds to laser.   The question of pain now becomes much more bearable doesn’t it.

You can find out exactly what it feels like without committing.

Just book a free consultation at a laser clinic – most are free. If you are suitable you can then get a test patch.  You may pay a small amount for this (£20-£30). So you can feel exactly what it’s like.  But you need to bear in mind that the first 20-30 seconds are actually the worst.  After that your nerves in that area become desensitised and the pain you feel will be reduced.

Ways to ease the pain.

You might also want to consider methods of reducing the pain.  I often advise clients to take paracetamol before they come plus they can apply a numbing cream around 30 minutes before.  You can just apply the numbing cream, then wrap the area in cling film to stop it from rubbing off.

Also I recommend using a cooler while having the treatment done. Some clinics have a Cryo Cooler, where freezing cold air is blown out of a nozzle and you can direct it at the tattoo while you’re having a laser treatment.  If the clinic doesn’t have a Cryo Cooler, you can use ice packs directly before, although a Cooler is more effective.

If you’ve had a tattoo done in the first place, you can handle the removal of it. Yes it’s painful, snappy and like hot pin pricks, but it’s also very quick, much much quicker than having the tattoo done.  So a small area may only take 30-60 seconds to laser.  Bony areas of the body feel worse than fleshy areas, however you can also do things to reduce the pain, such as numbing cream, paracetamol and a skin cooler.

Finally you will get to test the feeling during a test patch – but remember that the first 20-30 seconds (which could be the whole tattoo!) feels the worst.

If you’d like any more information on Laser tattoo removal, feel free to email me at rach@radiantliving.co.uk