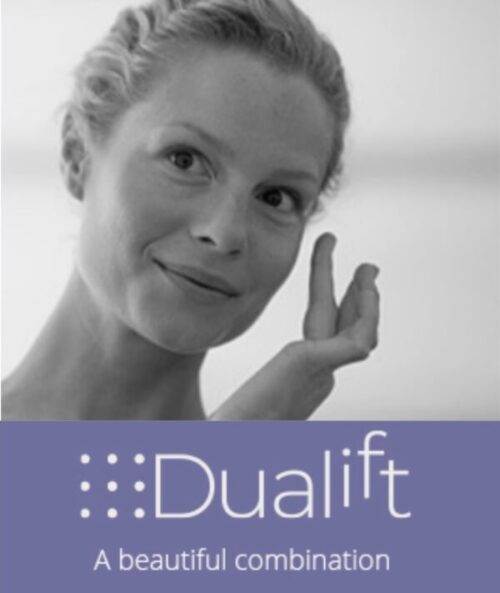 DuaLift is an exciting new treatment for the face and body. As the name ‘Dual’ suggests it has two treatment modes – which offer the very latest technologies – RF Microneedling and HIFU.

These two treatments provide the perfect combination to target the most common concerns when it comes to anti-ageing as well as skin health. DuaLift achieve outstanding results in many areas…

The treatment can also be carried out on the body to improve many other concerns..

How is DuaLift so effective?

DuaLift is so effective because it has the ability to target all the layers of the skin, as well as the ‘SMAS’ layers beneath the skin. This means that you’re getting an improvement at every layer, which makes for better results.

Previous systems have been able to target the top, middle or bottom section of the skin, but not all 3. However DuaLift can reach all these layers, due to it’s wonderful combination of technologies. 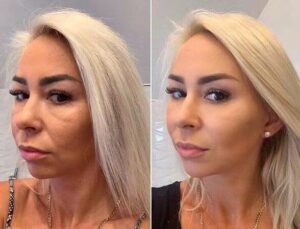 What are the technologies?

Radiofrequency Microneedling which gets referred to as RF Microneedling is a fairly new development in anti-ageing. It has become popular thanks to extensive media coverage from the brand Morpheus8 (the treatment Judy Murray had and whose photos were published in a newspaper.) 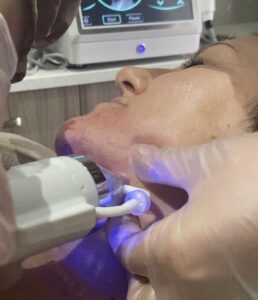 DuaLift also uses this technology. The needles in the handpiece are pushed in and out of the skin a bit like a stamp, and they cause tiny puncture wounds. Very cleverly these needles also emit a Radiofrequency energy for a split second at the same time. So the skin is ‘wounded’ in a safe and controlled way and it’s also given a hit of heat energy. Overall this makes the skin ‘heal’ and work harder, which makes it smoother, tighter and younger looking.

5D HIFU stands for High Intensity Focussed Ultrasound and can be carried out on its own. This giant in anti-ageing technology hits a deep layer called the SMAS layer – which is basically the scaffolding for your skin. The ultrasound waves which are delivered into the skin, causes the SMAS to shrink and tighten – and that has a lifting effect on the skin.

The combination of both of these treatments makes DuaLift a complete anti-ageing solution. It’s best to undergo at least 3 sessions, which will involve a combination of the two technologies in a specific way.  You don’t need to decide which is best and in which order, as your DuaLift practitioner will determine that.

What are the side effects?

Your skin will be warm, red and slightly tingly after your treatment, which may last for 24 hours (especially after RF Microneedling.) It can also feel tight for 5 days. After HIFU you’ll be less pink but your face might feel slightly tender, although you won’t be in pain. There’s a chance of a bruise too – but it’s unlikely. So overall although there’s a little downtime it’s mild in comparison to the results you get.

How much does it cost?

A small area of the face such as around your eyes or around your mouth – will cost around £150 per session, whereas a larger area such as lower face will be start from £300, and full face from around £400.

The price may also vary depending on the area of the country. You’re also likely to receive a discount for booking a course of treatments.