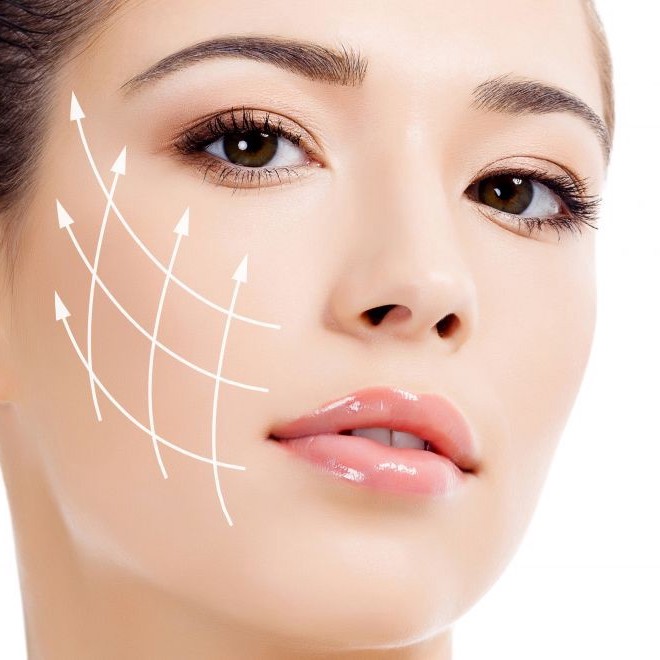 What is a Non Surgical Facelift?  The kind that the A-list Celebs are getting before the Oscars? Basically the term non surgical facelift is used to describe treatments which involve no surgery and no time off work, or just a little time off. These are the kind of treatments that actors and actresses have all the time! They are not invasive (no trauma to the skin) or slightly invasive (some trauma to the skin), which means no-one will know.  Here’s a brief description of the best known and most popular non surgical facelifts:

HIFU is a machine treatment.  A handpiece is used to send high powered ultrasound waves into the skin at different depths.  HIFU has been hailed as the most effective non surgical facelift in the world. There are many different brands available which all do a very similar thing. Ultherapy is one you may have heard of. The idea is that they target a deep layer under the skin called the SMAS layer, which lifts and tightens the face and neck. The results from one treatment last approximately 12 months.

These treatments have been around a lot longer than HIFU but are still very effective.  They came about originally to treat patients of Bells Palsy and help restore the muscle tone in the side of the face that had drooped. The principle for anti-ageing is the same; a machine produces a current which is directed into the skin and this stimulates facial muscles to lift and tone the face. Electrical facials are often called Microcurrent Facials and non surgical facelifts. You may have heard of ‘Caci’ or ‘Icon Ultra Lift’, although there are many different brands.  They definitely work, but require continual upkeep.  Think of it like this… if you go to the gym to work out your muscles, you need to keep going to keep them looking toned.  The same is true of your face!

This type of non surgical facelift is through the use of Dermal Fillers.  As well age, we lose volume in the cheeks and we lose shape in our face.  Instead of having plump cheeks and a defined jawline, everything starts to look like it’s drooping.   It’s possible to restore plumpness in the cheeks and redefine the jaw through the use of cleverly injected Dermal Fillers… hence a non surgical facelift.  The Fillers will eventually get re-absorbed by the body, but not all at once.  They will reduce bit by bit.  You can keep your face ‘topped up’ by having further treatments every 6-18 months.

Plasma is one of the newest treatments for anti-ageing.  It uses a pen like device which gives off ‘Plasma’ energy.  This energy is directed into the skin, causing tiny particles to vaporise.  Basically it shrinks and tightens the surface of the skin.  You can cover any area of the face, neck or eyes, although you wouldn’t do all the areas in one go.  It causes tiny dark brown dots on the areas which have been targeted, which drop off after around a week.  It’s really clever technology and can definitely give you a lifting effect after a course of around 3 treatments. The results of this will last for years, although you will obviously continue to age.  You can repeat the process as you age though.

A thread lift involves inserting a thread under the skin with a needle.  The thread is hooked under the skin and lifted into place.  Several threads will be inserted in one treatment, most commonly in the cheeks, jaw and neck.  The are different types of thread lift, but all create an immediate lift. Over time the threads  dissolve and promote new collagen under the skin. The results last around 1-2 years, depending on the type of thread. Again you will continue to age, but can repeat a thread lift approximately 18-24 months later.

Most people (including Actors and Actresses) want to look natural, and not false and frozen.  That’s why non surgical facelifts are more popular than ever.  It’s possible to get a fantastic non surgical ‘facelift’ result without undergoing the knife.

Of course there are many more treatments aimed at skin tightening, brightening and resurfacing as well as the reduction of lines and wrinkles, but the ones listed here are regarded as ‘non surgical facelifts’.

Often to achieve the best results clients will combine treatments.  For example it’s common to have HIFU followed by Plasma, or HIFU followed by Fillers.  Some treatments have to be carried out in a particular order, to stop one from ruining the other!

So now you know all about them you’re probably wondering how much these treatments cost! Read this to find out!

I hope you have enjoyed this article, and if you have any questions then feel free to email me at: rach@radiantliving.co.uk.